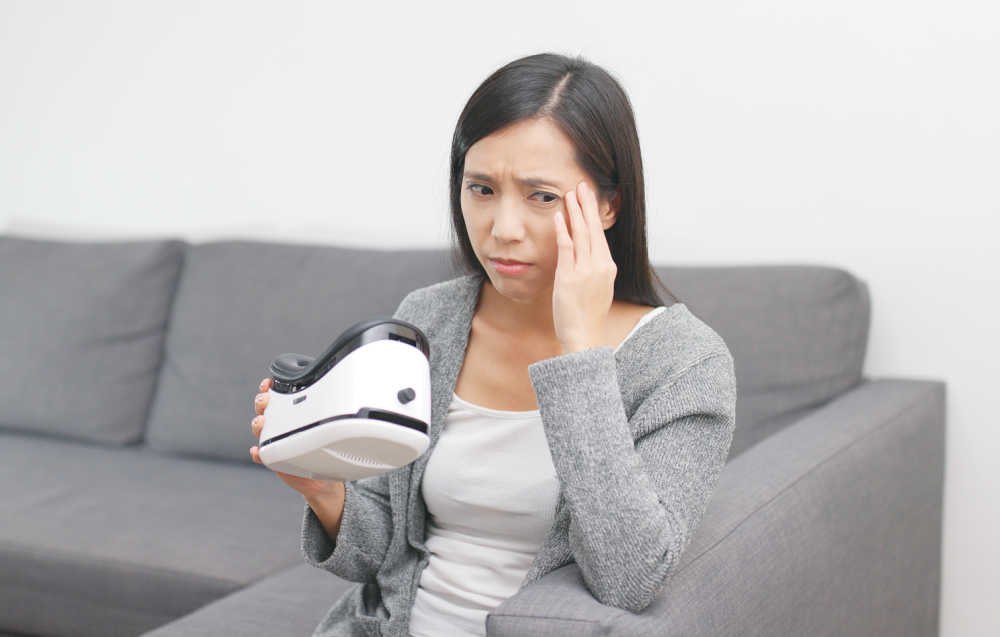 Virtual reality motion sickness is an unpleasant experience that may include symptoms like dizziness, nausea, or headaches. It occurs because your body is stationary, but your brain thinks you’re moving, thanks to the virtual environment.

The good news is VR motion sickness is avoidable. If you’re new to the world of virtual reality, then keep reading. We’ve pulled together our top tips to overcome VR motion sickness. A few simple changes should have you up and running in no time, without the unwanted side effects.

How do I prevent VR motion sickness?

You can reduce the chance of VR motion sickness by correctly setting up your headset and keeping the room well ventilated. You should also minimize vection and use a VR system with a high frame rate. If these options don’t help, consider reducing your session times, then slowly extend them over time.

It’s tempting to dive straight into using the headset but take a few minutes to make sure it’s properly set up for you. Adjust the strap to a comfortable position and set the interpupillary distance (IPD) so that the screen has no blurring.

Depending on the brand, each type of headset is different. Be sure to read the setup instructions carefully, even if it’s tempting to throw them in the trash.

Check the lenses to make sure they’re clean and smudge-free.

A hot stuffy room won’t do much to help with motion sickness. Instead, set up a fan or keep a door open to allow airflow. It’ll make for a more comfortable VR session with less chance of nausea.

If you’ve ever sat in a simulator and left feeling sick, vection is probably the reason. This occurs when you think you’re moving when there is no movement at all.

Thankfully, there are settings in some VR headsets and apps that allow the user to reduce vection. In POPULATION: ONE there are comfort level settings that reduce the amount of stimulus your eyes detect in their periphery. You can create a vignette effect that helps reduce the onset of nausea and other symptoms of motion sickness.

In your headset, you may also want to reduce player motion speed and adjust the complexity of textures.

4. Up your frame rate

A higher frame rate will help reduce motion sickness. The better headsets will display 90 frames per second or higher which is pretty good. If you’re using a PC that’s not up to spec, it may be running games and other apps at less than 60 frames which isn’t ideal.

Consider investing in a computer that’s able to cope with the demands of VR. You may prefer to update the PC’s graphics card driver, overclock its RAM, and optimize the settings in-game.

Set the movement option to teleportation mode if it’s available. This allows you to select a point you want to move to, and you’ll instantly appear there. Although the experience isn’t as immersive, people find it allows them to stay in their virtual world for longer.

Controlling the screen naturally by turning your head is preferable to using thumbstick controls. If you have the right equipment, use your body to control movement.

This may sound like a simple one but you are best to avoid overeating before using VR. Like those repetitive carnival rides, eating first is never a good idea.

7. Walk before you can run

There is a strong correlation between VR sickness and session length. Shorter sessions will help you avoid any unpleasant feelings.

If you’ve just discovered beat saber, it’s tempting to keep playing longer than you should. Trying to play through a queasy stomach is never a good idea. Instead, start with short sessions and gradually extend them, until you get your “VR legs”. Give it 1-2 weeks to build up to a one-hour session.

Some people find that peppermint or mint tea is good for calming an upset stomach. A small cup before (or after) a VR session may kneecap nausea before it kicks in. Fresh ginger, tea, or a supplement may also fight off motion sickness.

Aromatherapy may reduce symptoms of dizziness and nausea, so why not set up a diffuser in your room. If you don’t want to buy a diffuser, just buy a little bottle of aromatherapy oil and add a few drops on each wrist. The gentle, calming scent should help.

Some virtual experiences allow beginners to ease their way into the technology. Games that have been designed to orient you with simple movements are a good place to start. You could start with Job Simulator, which is great for beginners. Save games like Farpoint and Compound for a later date.

VR experiences with a lot of accelerations are also worth avoiding until you have gained some experience. Our inner ear is comfortable with constant movement in straight lines but jumps and turns are much more likely to make you sick.

Wristbands like the one marketed by Sea-Bands can help with motion sickness in the same way they do sea sickness. These bands put acupuncture pressure on your wrist’s Nei-Kuan point. Although Sea-Bands don’t make claims of stopping VR motion sickness, many people have VR enthusiasts have reported success using them.

YAW isn’t just a cool motion simulator, it also refers to the movement along a vertical axis. If you can imagine the front of a rollercoaster zooming up a hill, that’s an example of YAW. This experience in VR is one of the easiest ways to get motion sickness. If you’ve got an app that has thumb-controlled YAW, then use it at your own peril.

Many VR users swear by this type of software. They allow you to control your movements with arm and feet movements instead of a controller. Give them a try and see what you think.

A reference frame can reduce sickness and also enhance immersion. As an example, marking out a cockpit frame in a fast-moving flying game like Star Wars Battlefront will help the player ground themselves to the surrounding motion.

VR treadmills are a form of shoe that simulates walking, even though you’re just standing without moving. You may also want to test out cybershoes which are like a treadmill, only you use them sitting.

What is the history of virtual reality?

Virtual reality creates conflicting sensory experiences for your brain. Your eyes and inner ear sense movement, while the rest of your body thinks you’re motionless. These two signals disorient and confuse your brain, causing motion sickness.

What are the symptoms of VR sickness?

How long does VR sickness last?

Most people’s symptoms of VR sickness range from minutes to several hours. In extreme cases, it may last 2-3 days, in which case we suggest visiting your GP.

Who is most susceptible to VR motion sickness?

What are VR legs?

Most people will find they develop VR legs within 3-4 weeks. This is where the user becomes more resilient to VR motion sickness due to repeated use. Some find it can take as long as 6 months to build up their resistance.

Are there ways to medicate for VR motion sickness?

Some people have had success using legal medical marijuana or first-generation antihistamines like Dramamine or Benadryl. Consult your doctor if you want to go down this path.

Whether you’re gaming, meeting new people, or exploring new experiences, virtual reality is fun, inspiring, and immersive. But you’ll never enjoy the benefits if you’re feeling unwell. Trying out some of our tips should go a long way to helping reduce VR motion sickness.

If our advice doesn’t help, you’re best to avoid those motion-heavy apps like flying and racing games. Instead, start with experiences that keep your viewpoint locked in one place and use teleportation to move to new areas. Over time, you’ll be ready to step up to the more challenging games. 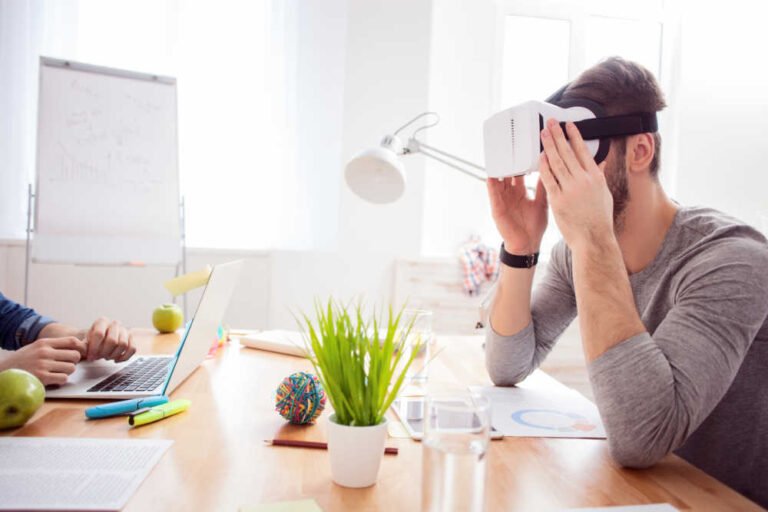 Each year, virtual reality grows in popularity around the world. With large companies like Meta investing heavily into this technology, you may be wondering what it’s all about. The best way to understand VR is to pop on a headset and give it a try, but if you want the answers now then keep reading…. 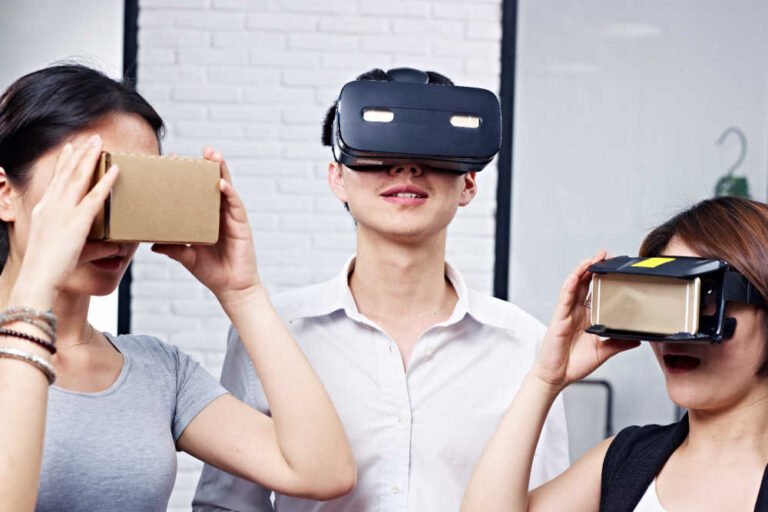 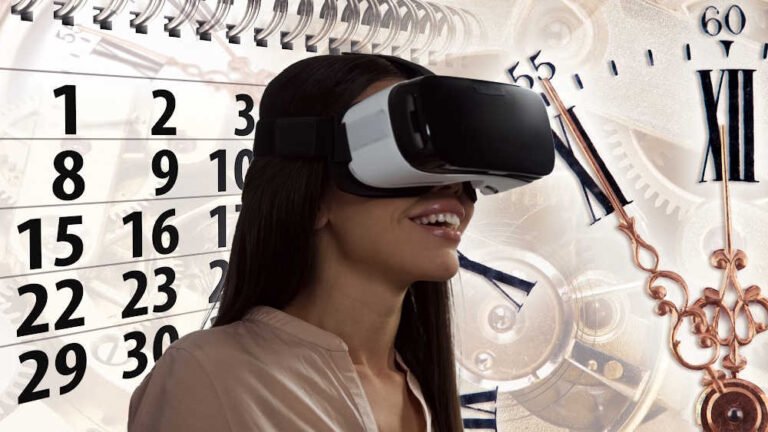 Virtual reality has only gained mainstream usage over the last decade, but the technology builds on ideas from the 1800s. Back in 1838, the first stereoscope was invented that projected a single image using two mirrors. This is just one of the concepts that VR would build upon. In this guide, we’ll take a walk…